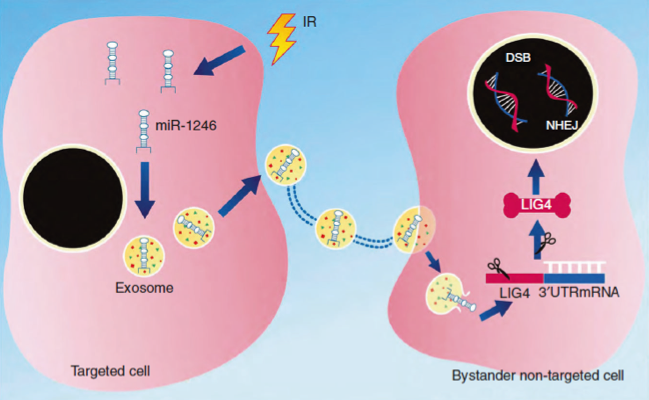 This is the first in a series of reviews of current studies that have recently drawn my attention. Thank you to the authors, Drs. Huang and Zhou, for providing meaningful commentary.

Imagine you are dry under your umbrella at a bus stop on a rainy day. Suddenly, a car comes driving quickly, hits a big puddle of water, and you get soaked. You were an innocent bystander — a victim of chance and rain. When cancer cells are subjected to radiation therapy, they die; however, as they are dying, they can still manage to send out molecular signals that might “splash” their neighbouring  non-cancerous, “innocent” cells. These signals “soak in” and damage the cells, causing them to become potentially cancerous in the future. Mo and colleagues discovered one way this event can occur during radiation exposure. Hopefully, based on their findings, more effective and protective therapeutic strategies may be developed to avoid such radiation-induced bystander effects.

Highly precise, radiation-based therapies are “a double-edged sword”, states Mo et al. in their paper “Exosome-packaged miR-1246 contributes to bystander DNA damage by targeting LIG4”, published in July 2018 by the British Journal of Cancer. On the one hand, cancer cells are subjected to a precise and lethal amount of radiation. However, on the other hand, non-targeted cells experience radiation-induced bystander effects (RIBEs). These effects can stimulate the reoccurrence of new tumors due to the damage inflicted on their DNA and the subsequent DNA damage response (DDR). The causes of the damage in the non-target cells and their corresponding mechanisms are poorly described. Mo et al. discovered a possible mechanism to explain this phenomenon.

Exosomes are small vesicles (30-120nm) that cells use to package amino acids, lipids and nucleic acids for sending them into the extracellular environment. Over the last decade, a series of discoveries have shown that small fragments of non-coding RNA (microRNAs or miRs) can influence gene expression and other cellular activities. In 2016, the same laboratory (Song et al., 2016) published their findings that miR-1246 expression was induced and that the molecule was subsequently transported in exosomes secreted from the irradiated cells. In their new paper, Mo et al. further explored miR-1246’s role in RIBEs.

Since cancer cells vary in their responses to stimuli, often due to accumulated mutations, Mo et al. decided to culture and irradiate normal human bronchial epithelial (BEP2D) cells. Their initial experiments confirmed that exosomal miR-1246 levels increased after a 2 Gy-irradiation treatment, and that this increase affected cell proliferation and colony formation. The formation of micronuclei, small nuclei that containing fragmented or damaged DNA, was also observed in cells cultured with culture medium from previously irradiated cells, as well as in non-irradiated cells containing a miR-1246 mimic (a chemically modifiable biomolecule that can simulate endogenous miRNA up-regulation). They then began to suspect that the irradiated cells produce miR-1246-containing exosomes that are transferred to non-target cells, thus, resulting in RIBEs.

Moving forward, they investigated the involvement of miR-1246 in bystander effects in more depth. P53 binding protein 1 (53BP1) is a protein involved in the DDR. Comparing exosomes isolated from irradiated cells and non-irradiated cells as well as the media of irradiated and non-irradiated cells, they observed an influence on this protein’s expression level. 53BP1 foci formation was suppressed by medium containing exosomes from irradiated-cell, and the miRNA mimic up-regulated 53BP1 foci formation. These results imply that the DDR in the cells was activated by miR-1246-containing exosomes from irradiated cells. One possible interpretation of this observation is that miR-1246 was inducing DNA damage. Moreover, the authors examined non-homologous end joining (NHEJ) activity, a DNA double-strand break (DSB) repair pathway activated by 53BP1, to further confirm this observation. Here, they state, “A significant bystander effect of decreased NHEJ efficiency was present in cells transfected with miR-1246 mimic.”

To identify specific targets of miR-1246 associated with the DDR and the NHEJ pathway, the authors used TargetScan analysis, a now commonly used algorithm for target microRNA discovery. Among the targets identified was LIG4 (DNA ligase 4 gene), whose expression was dramatically decreased as the concentration of the miR-1246 mimic increased. They then successfully demonstrated that miR-1246 directly “act[s] on the target sequence of the LIG4 mRNA 3’ UTR to suppress LIG4 expression.” Multiple cancer types up-regulate LIG4, which can potentially lead to radioresistance; thus, in this context miR-1246’s effect on limiting LIG4 expression may be beneficial. The situation is different in normal tissues, which can be harmed by this mechanism. The authors concluded the miR-1246 transferred to non-irradiated cells via exosomes can induce bystander effects by directly limited LIG4 expression, thus handicapping NHEJ.

Their findings provide insight into bystander effects of radiation therapy and potentially provide a way to develop more effective radiotherapy protection and prediction of therapeutic outcomes. The authors have a hopeful outlook on how their new results might improve human health through improved clinical practice.

Drs. Huang and Zhou, the principal investigations in the study, summarize* their perspective on the long-term value of their study:

In terms of radiotherapy, it is well known that secondary cancer is a very severe problem and very concerning. …  Through our work on the effects of exosome-packaged miRNA on the bystander DNA damage, it is suggested that these effects might be the factor that could induce secondary cancer; therefore, with respect to secondary cancer, the effects of exosomes can’t be ignored and need more attention in the future. Maybe in the future, can find ways to obtain better therapeutic outcomes through eliminating the bad exosomes. Maybe studies on the exosome will open new insights into the radiotherapy.

*Some wording was edited for grammar and structure, but the authors’ intended message was not altered.